This cute, furry dog from Taiwan recently became an online sensation because of the look that he fired to his owner right before he went off to work. He might have earned a degree in acting from the way he switches from his normal face to his sudden sad eye-look, which sparked many netizens’ attention.

The lab-terrier mix was an instant hit on various social media platforms, and it seems like he’s not showing any signs of dropping his act anytime soon. We can’t blame them, Teemo (the dog) is simply irresistible and charming at the same time.

Want to see how a dog would react if you are about to go to work? Check out what he looks like!

His owners know that Teemo is always a sociable dog. He loves every second that his family is around him but hates the moment when they are about to leave the house for work. It’s not like they can explain to their furry friend that they need to earn money to pay their credit card bills and other expenses, but he would surely make you know about his feeling every time his owners step outside their front door.

His famous “Sad Eyes” all started when Teemo’s owner had to spend a couple of time to finish some work. When his owner came back, he quickly flashed that sad eye look that instantly became an internet sensation.

Our furry friend’s act lasted for around 10 minutes, and after his act got uploaded on the internet, he instantly became a star. We have to give him a huge credit; aside from his unique approach to his owner, he also exhibited an unbelievable level of cuteness that would rip the Richter scale.

Netizens’ comments appeared left and right, showing their strong reaction toward’s Teemo’s video. Some said that they would work from home all the time if they were his owner. Others mentioned that they would quit their job and spend all the time in the world alongside Teemo. That means no need to work, but that also translates to no credit card bill payment!

Don’t assume that Teemo is always a sad dog. According to his owner, his canine companion is always considered a happy dog. He always appreciates all the small things his owners throw at him. 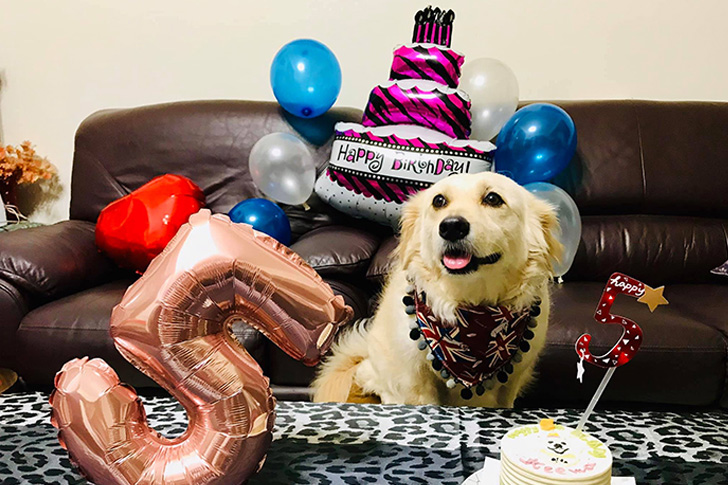 Teemo’s owner created him a Facebook page back in 2015, and his page centers around his overall antics and cuteness. His owner is very proud of him and he wanted to show him to the world!

Currently, he has around 4,000 followers on his page and these followers recently got a glimpse of how his owners spend their budget for Teemo’s 5th birthday. We are not sure if his owner used his credit card or something, but the cake is really appetizing! We just hope that Teemo doesn’t mind if we take a little bit off from his cake.

If you want to follow Teemo in his canine adventure, you can look for his page and you’ll always be on the loop on the most recent happening in Teemo’s crazy but happy life. We bet there are very few dogs out there that can match Teemo’s overall impact on social media, and we are 100% certain that there could only be one Teemo that became famous for his “sad eye” look.